Relive the experience of KJSCE Hack 2019 with all the insights of the event! 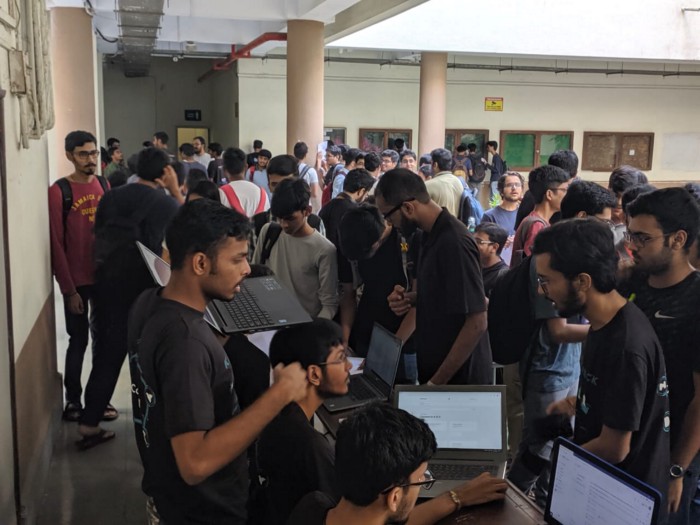 The registration process began and all the participants were provided with the entire schedule, a goodie bag, and an identity card. To ensure no mishaps during the hackathon we got each and every participant to sign a code of conduct during registration itself.

After the registrations got done, everyone assembled in the auditorium for the opening ceremony.

Every auspicious event begins with a word of prayer. We stood up in silence for the Somaiya prayer and requested our Computer Head of Department Dr. Deepak Sharma and our faculty advisors Prof. Grishma Sharma and Prof. Avani Sakhapara to light the lamp.

Thereafter, the themes for the Hackathon were announced.

The themes for the hackathon were:

So in all, we had 7 themes for them to explore and exploit to the fullest.

The problem statements were also announced,

One of our sponsors, TVARIT had given us a problem statement based on the AI/ML theme. The best solution to the given problem statement according to the judges would receive an internship opportunity by TVARIT.

Devfolio believes in bringing out the best from the participants and that’s possible by letting them choose their own strategy to create an excellent product. The ones that did not choose the problem statement given by Tvarit had the liberty to make a product that involves at least one or more themes mentioned previously.

All the prizes were announced and the sparkly eyes with hopes to win them were the most adorable to look at. A general announcement of the entire schedule and the rules and regulations was done and we concluded the inauguration ceremony. Every participant was pumped up and was looking forward to the 24 hour code sprint as they moved to the seminar halls and settled there.

The ideation period began which was for about an hour where everyone discussed various ideas for their projects and later they picked up one and began their project as soon as their Hacking period began.

An hour into the hacking period was lunchtime where everyone filled their tanks with delicious chole, paneer accompanied with puri, roti and gulab jamun for dessert to get juiced up for a long hacking period; as the saying goes “One cannot think well if one has not dined well”. The second phase of the hacking period went on until it was time to distribute some wafers for a crunchy aspect in the middle of coding.

To lighten the mood amidst all the tense programming we had also set up a gaming room that had various games such as Snakes and Ladders, Carrom, Jenga, Fifa19 for everyone to take some time off their coding and get refreshed by playing a few games.

As the sunset, the time for dinner arrived and it was time for them to eat a bit of light dinner along with a Chocobite.

Just after dinner, we conducted a GraphQL workshop for all the participants on behalf of our sponsor Hasura. Many of the participants liked the workshop and some of them implemented it in their projects as well. It was a good learning period for everyone as well.

Right after that, representatives from our student partner Developer Student Club conducted a small presentation on the different workshops they conduct and the various GCPCrashCourse tracks that were open for all the participants to explore and receive cool swags from Google on completion of any one track.

It was now time to distribute certain swags we received from our patrons. To do so, we came up with the idea of conducting a small quiz for everyone to take part in. It consisted of 10 questions and the ones who responded first would get a T-shirt. As this took place at 3 am, after the quiz, everyone was quite awake and ready to code.

To fill their empty tummy during the night, we provided everyone with delicious nachos and salsa sauce. Some participants got a bit tired and bed sets were laid out in order to take a quick nap for everyone.

Thus, the night passed and at dawn 6 am, the final 6 hours of the code sprint were remaining. Everyone was with hope and determination to complete their final product void of any errors. Very few indulged in breakfast due to the time crunch of the submission deadline approaching close.

At the stroke of 12 pm, the coding period ended and the submission period began. They had only an hour to submit their projects on Devfolio. Any project not submitted on Devfolio automatically got disqualified from judging. Nevertheless, no team got disqualified and all were judged. The pre-judging phase began after a decent Pav-bhaji lunch where everyone filled their empty stomachs and waited for their turn for judging.

During the final judging, each team had 6 minutes for their presentation followed by 2 minutes of questions. The judges in the final round were Kamal Galrani (Head of Data Science at Tvarit GmbH), Vatsal Kanakiya (CTO of 100x.VC) and Chirag Jain (Machine Learning Engineer at Haptik).

Every presentation topped each other which made it so hard for the judges to decide on the winners. The different aspects that they judged were Idea, Market Relevance, UI/UX, Implementation and Presentation.

The teams that passed the evaluation successfully and secured the top three positions were:

We congratulate all three winners for their exceptional performance. It was an exceptional event which wouldn’t be possible without certain people.

We are really grateful to our principal Dr. Shubha Pandit for supporting us throughout the preparations. To Dr. Sudha Gupta, our head of Departments Dr. Irfan Siddavattam and Dr. Deepak Sharma, for encouraging us. Huge gratitude for our faculty advisors Prof. Avani Sakhapara and Prof. Grishma Sharma for having our backs at each and every time we messed up. And finally a great shout-out to the entire CodeCell council without whom the 4th edition of KJSCE Hack would not be possible.